I may very well be coming to the end of my residency as a writer at a young offenders’ institution. I’m waiting to hear. For their decision. As with the prisoners I am in the hands of the gods. For the past six months I’ve been cooperating with Julian Armitstead, a writer who was based at HMP Hewell, on a project entitled ‘Oedipus in Jail’. Julian approached me at the end of 2012 suggesting we retell the first part of Sophocles Theban trilogy Oedipus the King but set in a prison. We would develop the script with serving prisoners and possibly even, perform or read it to an audience inside. It was an ambitious idea, some friends and colleagues thought over ambitious, but that was partly why I agreed. Over the last six years at HM YOI Lancaster Farms I have worked with groups of young prisoners (lads) on Othello, Macbeth, Our Country’s Good, Of Mice and Men and watched them recite Auden (his choice not mine) from the stage in the chapel. It was a given to me that despite many lads being culturally impoverished, I could work with them on great literature. Not all of them by any means, not most even, but some lads no question. In my experience they are flattered by my proposal, unfazed and keen to get out of whatever they are pretending to do. There are also in that jail, in any jail, just like Oedipus himself, naturally bright lads. But the major reason why the Oedipus story seemed apposite to explore with prisoners was its enduring narrative and subtext. A mother and father believe their son will come to no good, they are told so by those that know the future, they even try to take his life, but through the intervention of a good shepherd he is adopted across the mountains and grows up believing he is with his natural mother and father. Once he has grown it is again foretold he will bring destruction upon his family, so where does he run to? Back to where he came from, only to clash with his own anonymous father upon a one-way street, killing him before facing down the monster at the gates of Thebes by answering the riddle of the age and entering the city to be crowned and offered the hand in marriage of his own mother. This is just the backstory to Sophocles’ play, the crime that Oedipus sets out to solve in the drama.

Initially Julian and I were uncertain what we would dramatise, what part of the story and what the involvement of prisoners in the retelling would be. Why would a group of criminals, fictional or otherwise want to stage Oedipus? I thought I’d ask them. I went round classrooms and groups of lads, mostly cleaners on the wings, telling them the narrative and asking who was interested in retelling this story in the context of a jail. What surprised me was how many lads knew something of the story, even when they couldn’t remember where they’d heard it before. I then worked with different groups of up to four lads around the jail discussing why and how a group of prisoners might want to re interpret or interpret a two and a half thousand year old play. Once again my assumptions which I considered freethinking were brought to book. I suggested to a group in a classroom that a fictional group of prisoners might decide to retell it set in a contemporary housing estate and there was immediately some offence in the room. Why wouldn’t they try and do it just like the Greeks? Yeah, why does everything we do have to set on a miserable estate or in gangs?  I was reminded that the reason we were doing this, the reason I am there is, the point of drama itself, to help people escape.

They say there are seven stories: overcoming the monster, rags to riches, the quest, voyage and return, comedy, tragedy, rebirth. They are all in Oedipus and they are all in us and our fantasies but they are all, especially it seems, in prisons. Every time we discussed the plot someone always digressed to their own life, the life of a co-defendant, another lad on the wing, in love with his step mum, who had killed their father, or just wished they had. Lads that had never met their ‘real dad’ had been put into foster care at an early age and gone looking to no avail or to significant disappointment. ‘Comedy’ by the way isn’t the Jim Carey variety; it’s generally thought to mean the set-up of a misunderstanding that keeps parties apart, more in the Twelfth Night variety. The allegories at Lancaster Farms are comedies that tend to be about who stitched up who and are now on separate wings. We do have Romeo and Juliets and ‘From Getting By to Riches to Rags’. It became apparent that we didn’t need a group of fictional prisoners to dramatise Oedipus the King because he was already there, in the room. His story would be told through the lives of four prisoners, forced to confront their pasts through a victim awareness course. A course that the four characters have to complete if they want any chance of parole and usually the only arena where prisoners are asked to confront what they have done to others. Over the next few months, with the involvement of prisoners at HMP Hewell and Lancaster Farms Julian and I developed four fictional characters, each haunted by some element of Oedipus. They became: McBride, Stretch, Monk and Kasra. They are taught by former drama teacher Helen, and McBride is visited by his wife Lauren and his solicitor Shirley. It was McBride’s story that formed the spine of the plot. He is edging towards parole. He needs it to be with his son. But then, a new witness for an old crime comes forward, implicating him. And he must deal with the witness as well as pass a victim awareness course at the same time. He must do what a lot of prisoners do: face both ways. It doesn’t end well. 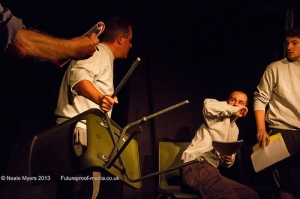 We put the characters into scene after scene, in conflict with a Governor, with a teacher, with their mothers, fathers, a wife and a son and the law. We got rid of the Governor, changed the gender of the teacher; turned the prisoners against each other and themselves. Every scene was read with groups of prisoners, tested for its authenticity, its power to hold; some were discarded all were rewritten several times until a first draft was completed. We then work-shopped the script for three days with a group of talented actors before a script in hand performance at this years’ 24:7 Theatre Festival in Manchester. It was well received. There’s another draft out now. Just released. With a London theatre. We hope the gods smile upon us.

One thought on “Oedipus in Jail”